We live in a world of gadgets and gizmos and children are learning through devices more and more. While S has a couple of games and Netflix on his Ipad, he also has apps to help him with phonics and reading. Most schools (both state and private) now have digital screens that the teachers use to help the children learn. While some still try and fight it, it’s the way the world is going. However, I do believe that screen time should be limited and that sometimes children need to slow down and engage their minds fully rather than have a computer helping them.
At the age of 4, play is still a big part of learning and encourages children to develop their imagination. As a parent though, I am conscious of S’s ever growing toy collection and try my best to now only buy him things that will aid in his development. As with most children, he doesn’t always like this very much! But in comes Magformers. We recently received a box of Magformers for S to trial. 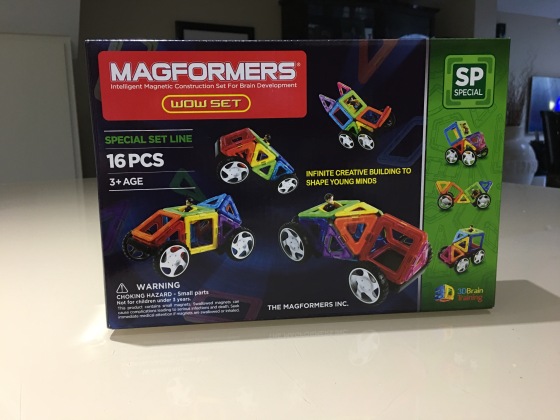 He was thrilled to be receiving something he’d never seen before. We got quite a small set, 16 pieces (2 of which were base wheels) to create different types of cars. We sat down before bedtime one evening and attempted to make some of the many combinations displayed on the cards (that come with it). S did struggle initially to picture how the square and triangle shapes fit together but after doing a few with him, he started to get the hang of it and created a few of his own automobiles.

What I like about Magformers is that it encourages a child to think creatively and to find new ways to shape the magnets to build various things. The magnets are pretty strong and are able to hold their positions. The colours are bright and are gender neutral. The options to build are endless. 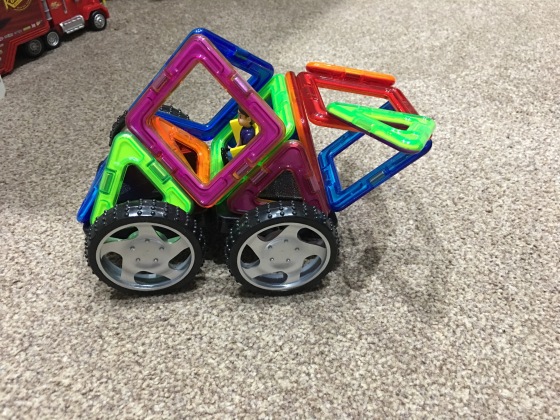 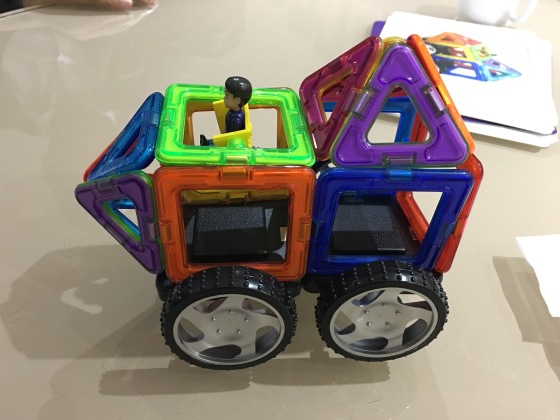 Magformers are not cheap. A bigger box of approx. 90 pieces costs in the region of £65. I do believe however that this is something that will grow with your child. As they get older and their imaginations get wider, their ability to create new things will expand. I’m buying my nephews a set for their birthday and I think it’ll make a great Christmas present for S.

One thought on “Magformers, a review ”