Did you know there was a national single parents day? No? Me neither! Until this morning. I was scrolling through Facebook when a fellow blogger put a post up about it. And I stopped for a minute to acknowledge all the single parents out there.

You see, although I do sometimes give myself the label “single mum”, most of the time I don’t stop to think of the work a single parent does. In my case I’ve pretty much had to act as a single parent since S was born so I guess I don’t know any better. I’ve recently had a few people call me flattering things like “super mum” and as nice as it feels, most mums I know are super mums, single or otherwise. It was only recently when a friend remarked on how “effortlessly” I made things look that I decided to think about what the main differences between being a single parent vs. being a parent in partnership was.

I guess the biggest difference is having someone share the load and in my case I’m blessed to have a family/friends who will listen to me rant about schools, give me advice on dealing with a 4 year old and take him off my hands so I can have a break. Between my family, friends and our nanny, I do get “me” time…which is why I don’t think of myself as a single parent in the traditional sense. Because I’m blessed to have a village of people behind me. I got a beautiful message from my cousin this morning that really touched my heart: “Happy single parent day natsy! God bless ur a star……May God continue to give u the strength to raise S in the ever so perfect way ur doing so.”

I can’t speak about other communities but in my community, being a single mum is a big deal. There’s still the taboo associated with divorce, let alone getting divorced when you have a child. But ultimately I’m not one to shrink back from doing what’s right for S (and myself), even if it goes against the norm.

Even with my army, parenting is a tough job! It’s relentless, exhausting and gives you grey hair’s quicker than you can say Meryl Street (true story!) But there’s also so much joy! And single parent or not, that’s what we have to focus on. It’s the joy that gets us through the tough days.

So to all the real single parents, I salute you! For the amazing job you do day in and day out. I personally think more credit needs to be given to single mums specifically. We still live in a world where single dad’s are glorified, like they’re doing something noble while single mums are often thought of differently. It only takes a little logic to see what an amazing role model a single mum can be…just look at Barack Obama, Adele and Justin Bieber 🙂 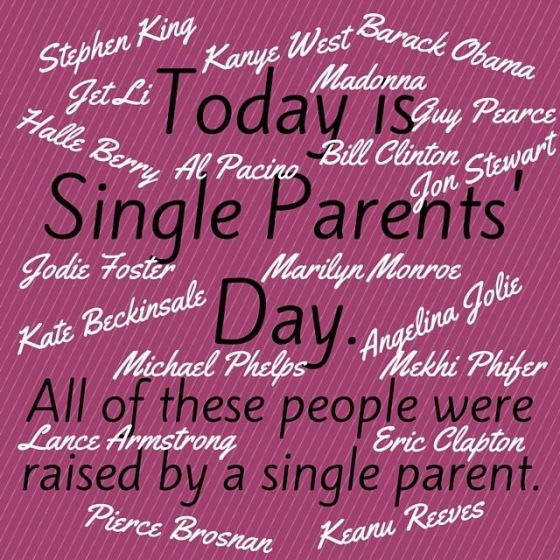